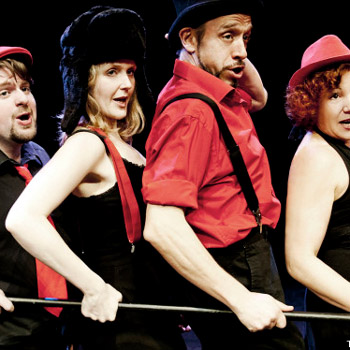 Showstopper! is entirely improvised: a brand new musical is created at each performance. A writer has just one hour to create a hit show to impress his producer. Stuck for ideas, he takes audience suggestions for a title, storylines and musical styles that they'd like to see in the show.
The Showstoppers then create a musical from scratch based around that structure. Utterly unpredictable, frequently side-splittingly funny, packed with drama and featuring dazzling dance routines and catchy melodies, Showstopper! leaves delighted audiences singing all the way home.
Showstopper! has enjoyed sell-out runs at the Edinburgh fringe in 2008-2011, and nine months of sell-out Monday nights at the Kings Head. It has toured the UK as well and has also featured in a six-part series on BBC Radio 4. The Showstopper ensemble includes popular comedian Pippa Evans.  For more information on Pippa click here.
Having now seen Showstopper! twice, I can testify that not only is each performance achingly funny, it's a genuinely new full-length musical every time. Top-class in creativity in action. Worth seeing again and again."  Time Out
Read More