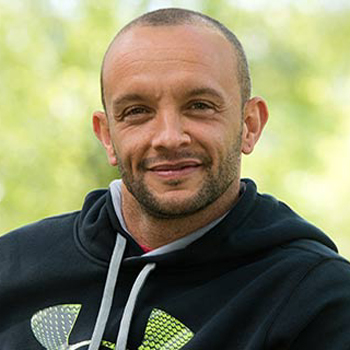 When Jamie excelled at a school sports day as a 10 year-old, his Headmaster, Eric Atkins, encouraged him to join the Newport Harriers, in South Wales. After this introduction to athletics, he never looked back!

Jamie quickly developed into a key member of the British athletics team, instantly recognised for both his big personality and peroxide dreadlocks – which actually lead to a promotional campaign with Vidal Sassoon.

Jamie burst onto the international team on his debut for the GB & NI team at a Junior International in Spain, in 1991, winning the 200 metres and breaking the Welsh record at the same time.

In his first year competing over 400m, Jamie was selected for the 1996 Olympic Games and won Silver as part of the 4x400m quartet.

Jamie became World Indoor Champion at 400m in 1999 and still holds the British Indoor record which he set in 1997. In total Jamie won 13 medals at Olympic and Commonwealth Games, and in the World and European Championships.

Following the disqualification of the USA team from the 1997 World Championship, after Antonio Pettigrew admitted doping in 2007, Jamie helped campaign for the Gold Medals to be awarded to his team, including Iwan Thomas, Roger Black and Mark Richardson, after a 13 year wait.

A hugely popular and respected personality in the world of athletics and beyond, Jamie also actively supports many charities through his fundraising business and is an ambassador for Barnardo’s and Cancer Research Wales.

Jamie’s success as a former World Champion and Olympic Silver Medalist guarantee inspirational anecdotes and stories of how pure determination and dedication can achieve lasting success. Combined with Jamie’s skills as a speaker and entertainer – his humorous and approachable personality always coming to the fore – ensure he is able to convey your message and all of his experience and knowledge to any kind of audience