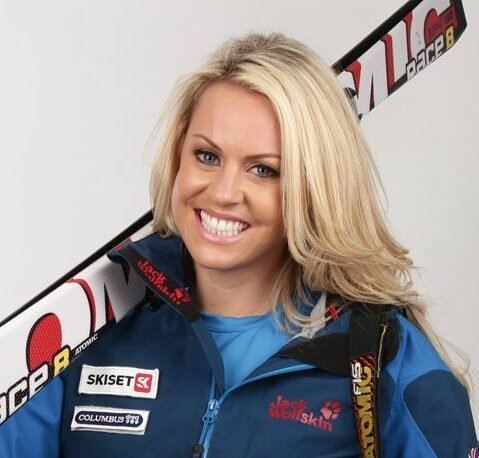 Chemmy is a 4 x Winter Olympian, has a career high ranking of 8th in the World, is 7 x British National Overall Champion and  is the only British female skier to ever win a run in a World Cup. She is widely regarded as one of Britain’s greatest ever skiers.

Chemmy defied the odds in a time where competing at a Winter Olympics was unusual for a British athlete, and pioneered a skiing movement that has inspired a generation. Resulting in not just skiers, but British Winter Sport athletes as a whole seeing the Winter Olympics as a realistic and achievable goal. 44 gold medals later!....

Since retiring from competing on the world stage after The Sochi Olympics in 2014, Chemmy has immersed herself in the world of TV & media, where she has presented for the BBC on Ski Sunday and commentated on the World Cup Ski Series for Eurosport amongst being a guest on many other shows. Furthermore, she competed in ITV's Dancing on Ice in where she finished 5th.

In addition to her TV commitments and hosting events and despite retiring, Chemmy continues to constantly push her body to the limit, competing in multiple physical challenges including the World’s Toughest Ski Race in Greenland, the 100-mile road race in London and climbing Mt Kilimanjaro, raising over £800,000 for charity in the process.

Charity work is very important to Chemmy. She acts as an active ambassador for Right to Play, Ski4Cancer, SnowCamp and United Learning. She has visited multiple under-developed countries such as Rwanda and Tanzania, raising money for areas of conflict resolution and also to promote sport and play to educate ‘over one million children in some of the world’s poorest communities.’

Chemmy is an inspiration to all, having broken 49 bones in her life including her neck aged 11. She is no stranger to adversity and remains committed to inspiring the next generation and educating people from all over the world through sport. Most notably, she created the ‘X-Elle’ scheme, which aims to develop girl’s confidence through sport. Part of her passion involves travelling the world, visiting countries such as Dubai and New Zealand, in addition to her travel across the UK, telling her story and inspiring others. From school pupils to businesses, she helps give them the confidence to create big dreams and do everything humanly possible to achieve them.

In 2018, Chemmy became a well-loved BBC Winter Olympic Sport Commentator. She was enthusiastic, empathetic and gave a unique insight into the games that only someone who has been through the experience as an athlete could give.

A great motivational speaker for any corporate event.