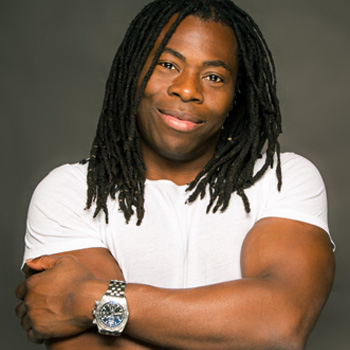 Ade Adepitan is a gold medal winning paralympian basketball player who has won top medals in his sport, completed the London Marathon and forged successful careers as a television sports commentator, presenting shows for both children and adults on the BBC, and as an actor.
Nigerian-born Ade contracted polio at the age of 6-months, which left him unable to walk but from an early age he had aspirations to become a sportsman.

With a variety of high profile speeches including the launch of the London’s Olympic bid 2012 and for businesses including The Royal Mail, BUPA, NSPCC, Lloyds TSB and BT, Ade has proved to be a highly sought after motivational and Olympic speaker. An equally talented presenter, he has a wealth of recent high profile TV experience including  Rio Paralympic coverage, The Travel Show and Children in Need.

He is patron of the disability sport charity Wheelpower, The Association of Wheelchair Children and Scope.  He is also ambassador for the NSPCC and The Prince's Trust.
Read More