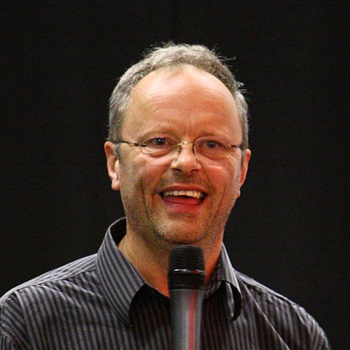 Robert is perhaps best known for his portrayal of the mechanoid Kryten in the BBC TV comedy sci-fi series Red Dwarf.  Red Dwarf was the show with the highest ever ratings for BBC2.
Robert Llewellyn's involvement with Red Dwarf came about as a result of his appearance at the Edinburgh Festival Fringe in his comedy 'Mammon, Robot Born Of Woman' - a story about a robot who, as he becomes more human, begins to behave increasingly badly. This was seen by Paul Jackson, the producer of Red Dwarf, who invited Robert to audition for the role of Kryten.
He joined Red Dwarf in 1989 at the start of Series 3 and stayed till Series 8 in 1999.
Robert has also appeared on TV screens without the iconic Kryten make up, most notably when he presented Channel 4's 'Scrapheap Challenge' a gameshow series with a difference that sees teams of engineers competing to build machines from materials scavenged from a scrapheap, and then go on to complete specific challenge tasks.
Although most people know Robert from television, his career also includes writing plays, and being a stand up comedian as well as a published author.
He show business career started out as a hobby, when he organised some amateur cabaret evenings in a riverside warehouse overlooking Tower Bridge in London. The shows were a great success and he eventually helped form an alternative comedy theatre group called the Joeys. The group toured the United Kingdom and France in the early 1980s but split in 1985.  Robert had written most of their material so it was a logical next step for him to begin writing novels at this time.
His other presenting roles on TV include a version of Discovery Channel's 'How Do They Do It?' and 'Hollywood Science', the latter being a joint production between the BBC and the Open University.
Robert is also a champion of electric vehicles, and all things sustainable.
He has written ten books including "Sold Out: How I Survived a Year of Not Shopping" published in 2008, which is based on his YouTube series "Making Do".
He narrated the 2010 Channel 5 series 'The Boss Is Coming To Dinner' and in the same year the 'Carpool' series began broadcasting on Dave the UKTV channel.
From his Red Dwarf reminiscences to writing, Robert is a gifted raconteur and is a highly entertaining after dinner speaker.
Read More