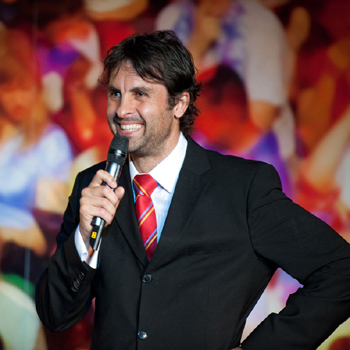 Paul is a stand-up comedian and speaker, writing and performing his material and with a sharp line in observational comedy. He is a regular on the comedy circuit and the corporate scene, working for clients including Sony, Vodafone, British Airways, British Telecom, Manchester United, American Airlines, Hilton and the Insurance Institute. He is equally at home at Sporting Dinners,  working with big names, including Jack Charlton, Dennis Law, Martin Bayfield, Sir Geoff Hurst, Geoffrey Boycott, Paul Merson, Gareth Chilcott, Barry Mcguigan, John Conteh, Geoff Miller and many others.

Paul was a speaker at the prestigious Annual Variety Club Stag Dinner in London, hosted by Jimmy Tarbuck and Bruce Forsyth, and was very well received.  He has played all the major arenas in every major city in the UK as part of the Michael Buble Tour from Dublin, Glasgow, Newcastle, Nottingham, Cardiff including a storming show at Manchester's MEN arena in front of over 9,000 people. The tour also took in a 3 night run at London's Hammersmith Apollo. He also entertained US and British troops in war-torn Bosnia as part of a 10 date comedy tour.

Paul has plenty of television experience performing on Friday Night Live and also as a presenter on Sky Sports.  He hosted Goals on Sunday with Chris Kamara and Football First - Sky Sports' Saturday night equivalent of' Match of the Day.

He was a former professional footballer,having been signed by Peter Shilton for Plymouth Argyle, and scoring on his league debut.