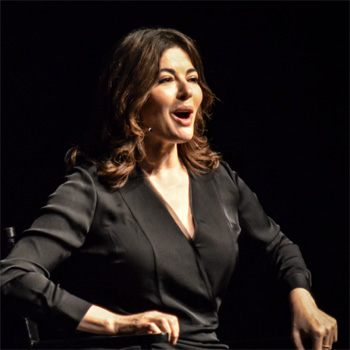 Nigella wrote her first book, in 1998 called How To Eat: The Pleasures and Principles of Good Food. This was then followed by many other successes, such as her ever popular channel 4 show Nigella Bites. Many other popular television series and bestselling books have added to Nigella‘s long list of achievements, such as selling over 10 million copies of her bestselling books internationally.
Her remarkable television career in the food industry has launched Nigella into further success and great popularity. Most recently appearing in MasterChef Australia as a guest judge in 2016, as well as her latest cooking series on BBC2, Simply Nigella, which was aired in 2015. Other shows Nigella has been involved in are BBC2‘s Nigellissima, Nigella Express and Nigella‘s Christmas Kitchen, along with Food Network‘s Nigella‘s Feasts, all of which were watched and greatly anticipated.
Nigella has also won several high status awards, such as being voted Author of the Year in 2000, followed by many others such as Best Food Personality by the Observer Food Monthly Awards in 2014. To top that, she was awarded the Television Personality of the year at the Fortnum & Mason Awards in 2016.
And even when you thought Nigellas career couldn‘t get more diverse, she has had a very prosperous career as a freelance journalist! She read Medieval and Modern languages at Oxford prior to her accomplishments in the writing and food industry, and then found an established and impressive job as the deputy literary Editor of The Sunday Times. Thereafter, she obtained a career writing a beauty column for The Times Magazine and a large range of various newspapers and publications. It‘s as if Nigella could do anything at this point!
Nigella has kept audiences entertained and engaged for many years through the use of her wit, charm and welcoming nature. Charismatic and magnetic, she recently entertained and spoke to a full-house at the well-known Sydney Opera House in 2016. Nigella is available for personal appearances, event hosting, and fireside chats.
Read More