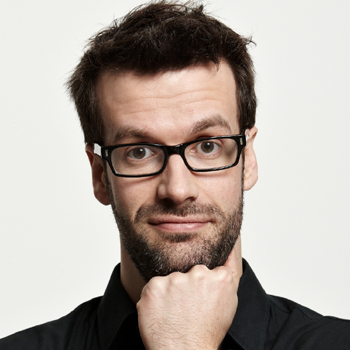 Marcus began his comedy career at Bristol University, studying drama and won the BBC New Comedian of the Year in 1996. He has since emerged as a major comedy, writing and acting talent, regularly appearing live and on TV, film and radio. His last tour show Devil May Care was filmed at Wilton's Hall and is available on Amazon Prime

The Edinburgh festival has delivered a great deal of critical acclaim for Marcus over the years. His 2006 sell out national tour went on to become the top selling DVD 'Planet Corduroy'. In 2005 he featured in BBC 4's The Late Edition and his TV appearances include 'Live at the Apollo', 'Have I Got News For You' as both host and panelist, 'The AZ of Music', 'News-Knight' with Sir Trevor McDonald, 'QI', 'Would I Lie to You?', 'Question Time', 'Marcus Brigstocke's Trophy People', 'Saturday Night Live ... Again', and 'Argumental'.

Other Tv credits include; Steph’s Packed Lunch(C4), Comedians Giving Lectures(DAVE), House of Games (BBC Two), The Graham Norton Show (BBC One), Famous and Fighting Crime (C4), team captain on Argumental(Dave), and host of The Late Edition and I’ve Never Seen Star Wars(BBC4). Other appearances include;Live At The Apollo (BBC1), Have I Got News For You(BBC1), Mock the Week (BBC2), QI (BBC2), Sorry I’ve Got No Head (BBC1), The Late Edition (BBC4), and the 11 O’Clock Show (Channel 4).

His acting work includes playing the lead character Adam Savage in Simon Nye's BBC 1 sitcom 'The Savages', and another leading role in BBC3's 'Vacant Possession', (Twisted Tales). Not to mention the brilliant self-promoting TV Historian David Oxley (BA Hons) in 'We Are History', a cult success that bought him to the attention of many an adoring fan and almost as many dismayed archaeologists.

He created three series of 'The Museum Of Everything'. He played the head of consultancy firm - Unthinkable Solutions as Ryan Packer in 'Think The Unthinkable'. Other recordings include 'Just a Minute', 'Newsquiz', The Today Program, 'The Unbelievable Truth', '2000 years of Radio', 'A funny thing happened on the way to the dispatch box' and the wonderfully silly '99p Challenge'.
In 2007 and 2008 Marcus traveled to the Arctic to see for himself the effects of climate change, working with a team of scientists to discover the pace of change and discuss the impacts of global warming and how to lessen them.
In 2010 he made his musical theatre debut as King Arthur in Spamalot and played the part of Albert Perks in the 2011 production of The Railway Children.

A master of satirical comedy, Marcus is blisteringly funny over a wide range of topics including; Climate Change, Religious Extremism, Immigration, Loans Companies, The Special Relationship, Compensation Culture, Women's Magazines, The EU and David Blaine, not to mention his own personal battle against his middle class roots.

In 2017, BBC Radio 4 broadcast his first serious drama, The Red which drew on his own experience of recovery. It won the Best Single Drama award in the BBC Audio Drama Awards in 2018. Now a regular  onI’m Sorry I Haven’t A Clue, The Now Show and Just A Minute; he has written and recorded three series and four specials of his hit show Giles Wemmbley-Hogg Goes Off.Most recently, he co-starred alongside Kerry Godliman, in three series ofThe Wilsons Save The World.

Marcus and Rachel host the Speaker Drinks in Lock Down