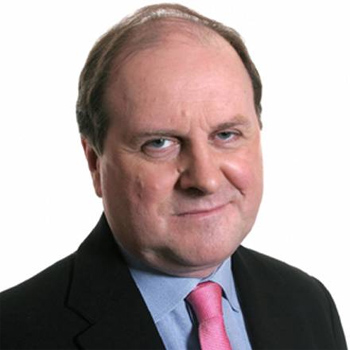 Jim joined Today in 1994, abandoning the relatively civilised lifestyle of The World At One for those bracing early starts. He did have the advantage of long experience in political journalism, with all the resilience that required.

He has often said, in fact, that his job hasn't changed much over the years.  "It's still about telling stories straightforwardly, as interestingly as you can, and as accurately as you can manage," he says.

Jim has travelled across the world for the programme - in Europe, the Middle East, China (including Tibet), Australia and, maybe most notably, to the United States.

Since he joined the BBC in 1988 he has worked on every presidential election and his store of American political trivia is the stuff of office legend. That American interest was the subject of his second book on the Blair era, The Accidental American (2004) about Tony Blair's relationship with George W Bush. He had previously published The Rivals in 2001: the book that first revealed the stormy nature of the relationship between Blair and Gordon Brown.

As well as his work for Today, Jim has written and presented many documentaries for Radio 4 and has anchored all Radio 4's election specials for more than a decade.

A special interest is music. His 60-part series, The Making of Music (2007) for Radio 4 was voted radio programme of the year by The Voice of the Listener and Viewer. His book of the same name explains his passion of music, but also the fact that his piano-playing is not for public consumption, under any circumstances.

For some years he presented a Radio 3 programme on opera and has presented many concerts for BBC radio and television. He has chaired Radio 4's monthly Bookclub since it started in 1997.

Jim was educated in Aberdeen and at Syracuse University, New York.

He has been a journalist on The Press and Journal, The Scotsman, The Guardian and The Washington Post.

He gets back to Scotland as often as he can and became chancellor of Stirling University in late 2008.
Our event was fantastic and James was brilliant he managed to handle a couple of minor onstage hiccups with great ease.
The Chartered Institute of Library and Information Professionals June 2010
Read More