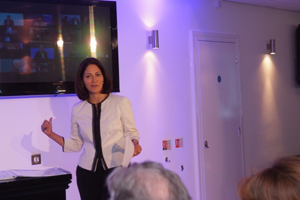 The first panel was about conference and event hosting, and consisted of Nicholas Owen, Nisha Pillai and Michael Portillo. They discussed their experiences of working at events, and covered topics such as briefings, keeping events to time and maintaining audience interest and engagement.

The second panel dealt with the economy and featured former trade minister and head of the CBI Lord Digby Jones, Coffee Republic founder Sahar Hashemi, ex Dragon Doug Richard and the LSE's Tony Travers. Topics covered included the possible signs of economic green shoots, consumer confidence and the role the media has played in affecting this.

The day was rounded off by cabaret supremos, Kit and the Widow whose finale was a performance of Nessun Dorma with the words taken from an Indian Takeaway menu!