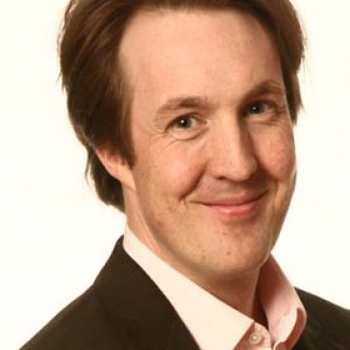 Born in Jersey in 1971 but now based in London, Will Smith emerged as a story-telling stand-up comedian at the age of 33 when he performed his first solo show 'Will Smith Is Much Obliged' at Edinburgh in 2003. He has never looked back since and stands today as one of the most in-demand comedians and comic writers in the UK.
After his debut outing Will was immediately offered a solo run in London's West End and was also asked to co-present Channel 4's spoof royal dating show 'A Wife For William' as the posh alternative to professional northerner Vernon Kay.
Will Smith returned to Edinburgh in 2004 with '10 Arguments I Should Have Won' which led to an appearance at the Royal Variety Performance and helped him win the 2004 Time Out Comedy Award. A national tour followed in 2005 and saw Will Smith scoop The Chortle Best Headliner Award and gain a South Bank Show Award nomination for Best Breakthrough Artist. It also earned him a role as a regular contributor on BBC3's 'comedy show Comic Side of 7 Days'.
His 2005 Edinburgh show 'Misplaced Childhood' titled in honour of the 20th anniversary of the album of the same name by 1980s prog rockers Marillion, faves of the teenage Will Smith, examined and ruminated on the ways in which childhoods had changed. The subsequent 2006 tour kicked off with a six-night run at the Soho Theatre, which sold out almost as soon as it went on sale.
Will's 2006 Edinburgh offering 'How To Be Cool' explained his idea of what cool is and how to achieve it, along with Will's own "posh" ideas of cool and why to his mind Ray Mears is cooler than Pete Doherty. It was followed by a spin-off book, also called 'How To Be Cool' in 2007 as a guideline for geeks and nerds the world over.
Since then Will has toured in his own right and supported Ricky Gervais on his record-breaking 2007 Fame tour.
Will Smith's other TV credits include roles in 'Time Gentlemen Please', 'Happiness', 'Days', 'Ruddy Hell! It's Paul And Harry' and the part of inept Tory researcher Phil Smith in Armando Iannucci's multi-award winning sitcom 'The Thick Of It' as well as guest appearances on The Charlotte Church Show, Never Mind The Buzzcocks, The Last Word, The C Word: How We Came To Swear By It and, by way of contrast, a reporter's role on Richard and Judy.
On radio, Will was one of the stars of Iannucci's Sony award winning Charm Offensive and is a regular guest on both BBC Radio 4's Banter, Clive Anderson's Chatroom, The Personality Test, The Lee Mack Show, and has written and performed two of his own shows Midlife Crisis Management and The Tao of Bergerac, where he demonstrates to the world how every movie and actor is no more than six steps away from an episode of the TV detective series.
Equally popular and successful as a writer, Will Smith has written for a host of big names and shows in TV comedy and radio.
He also writes occasional journalism, notably for Intelligent Life magazine where he learns something new for each issue, including banjo-playing, ice-sculpting, circus skills and how to make a soufflé.
Read More