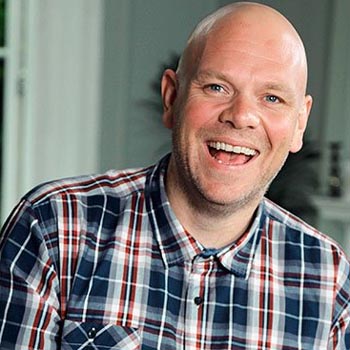 Successful chef and pub owner who came to prominence through Masterchef the Professionals.
Tom Kerridge is known for putting a modern spin on traditional British food.  He is the owner of The Hand & Flowers in Marlow - a gastro pub which he opened in 2005 with his wife Beth. The pub was awarded its first Michelin star in 2006, and was granted another in 2012, making it the first pub in the UK to be awarded two coveted Michelin stars.
As a chef he has appeared on the Great British Menu, MasterChef and Saturday Kitchen. Since 2015, he has presented Food and Drink on BBC2.
His first role in a professional kitchen was as a commis chef at Calcot Manor in Tetbury in 1991. He was a chef de partie in several restaurants before joining Rhodes in the Square as sous chef under Gary Rhodes in 1999.
He spent a further two years as sous chef at Odettes in London. In 2001 he became head chef for the first time, at Bellamy's Dining Room, and then at Great Fosters in Surrey. He moved back to London to become senior sous chef at Monsieur Max until 2003, before moving to Adlards in Norwich as head chef once more. Then in 2005 he opened The Hand & Flowers, and  was awarded two Michelin stars.
Tom Kerridge describes himself as "not a Michelin-star kind of guy". His signature dish is his take on a hog roast involving cooking pork belly in a bain-marie, which is then wrapped in skin and roasted. This is accompanied by a stuffed pig's trotter.
He has appeared in series five and six of the Great British Menu, creating main courses to the final banquet on both occasions, and has subsequently appeared as a judge on the programme every year since. He has also appeared on the very popular Saturday Kitchen.
In February 2013, he was a guest chef on the BBC programme Food and Drink and later became co-host in 2015.
In 2013, he presented his own BBC2 food programme Tom Kerridge's Proper Pub Food and in 2014, hosted Spring Kitchen with Tom Kerridge on BBC1.
Read More