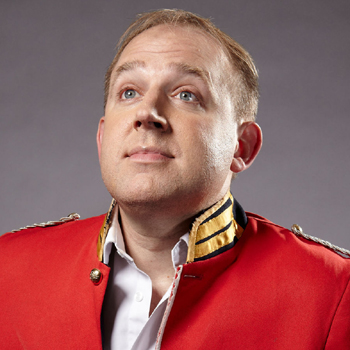 When you see Tim Vine perform you certainly get value for money.

He is a joke machine gun, rattling out one joke after another in quick succession.  At full pelt Time sprays our 10 jokes a minute.  Keep the laughs short he's got a lot to get through.

Sell-Out Edinburgh festival shows in 1999 I'm Vine Thanks, Tim Vine The Minotaur, 1998 Tim Vine Flat Out, 1996 The Tim Vine Shambles and 1995 The Vine Fiasco, which won him The Perrier Best Newcomer Award.

Recent TV credits include, Host of Fluke (Channel 4) this show was devised by Tim and short listed for a 'Montreaux Golden Globe Award'.  Host of Whittle (Channel 5), Host of The Tim Vine Christmas Present (Channel 5) and Host of Housemates (BBC1).  Tim was the first man to appear on Channel 5 co-hosting the first show they broadcast called This is Five and was guest host on Not The Jack Docherty Show (Channel 5).  He also appeared on the Des O'Connor Show (ITV) The Stand Up Show (BBC), Call My Bluff (BBC), Give Us a Clue (BBC), Night Fever (Channel 5), and he is a regular on Loose Ends (Radio 4).  Also Tim wrote, directed and starred in a short film called Two Men Left.

He also turned up on ITV's Comedy Club, treating the audience there to his popular oven glove impressions.

Tim's basic philosophy is, 'the audience came to hear jokes so I'll give 'em jokes' and that's what he does.  He gives them several hundred very silly ones.