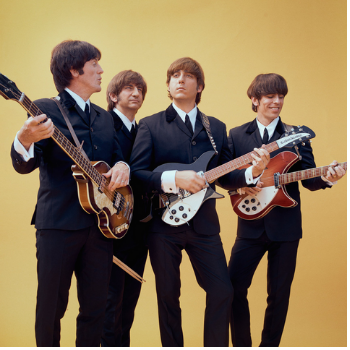 The Bootleg Beatles are one of Britain's most popular bands, having achieved success through their immaculate re-creation of the sights and sounds of the Fab Four live on stage.

Popular with all ages, the band are now firmly in the forefront of the contemporary music scene.  They have appeared with groups such as Oasis and in 1995 played in front of a 90,000 strong crowd at the Glastonbury Festival.

In 1996, the Bootleg Beatles toured with their Christmas Proms show; a 20-date tour covering the length and breadth of the UK.  At each venue, they were joined by orchestras such as the London Philharmonic Concert Orchestra and the Scottish Chamber Orchestra.

The group were formed in the 1980s from the cast of the West End musical Beatlemania.  They have filled major venues all over the world, from the Royal Albert Hall in London to the Budokan in Tokyo and were the first western rock group invited to perform in the Soviet Union, entertaining 250,000 people at concerts from Leningrad to Yalta.