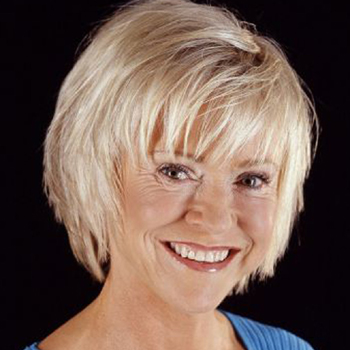 Sue Barker has had a long and distinguished career in tennis, at one time being ranked number 3 in the World.   During her time as the British Number One, she chalked up wins against players including Chris Evert, Martina Navratilova, Billie Jean King and Virginia Wade.

Sue's bubbly personality and professionalism have always endeared her to the British Public and these days she is now one of the main sports presenters at the BBC.
Over the last twelve years she has established herself as a key figure on the BBC Sports team, fronting such television coverage as The Olympics, Grandstand and of course, Wimbledon. Sue has also hosted BBC Sports coverage of the Australian Open, the French Open, Queens Club Championships and Eastbourne.  She is also the presenter of the ever-popular sports quiz - A Question of Sport.
Other sporting events she has hosted have included the Grand National (1996-2006), The Derby (2001-2007), Racing at Ascot and Longchamp (1995-1999), Hennessy Gold Cup at Newbury, rugby league Challenge Cup, The Great North Run, World Athletics Championships and  European Athletics Championships (both since 1999), Commonwealth Games (since 1994), Winter Olympics (since 1994), and the BBC Sports Personality of the Year.
Sue was heavily involved in the BBC`s coverage of the London Olympic Games.
Sue is President of the Kids on Court Campaign, an initiative launched by the Sir Cliff Richard Tennis Foundation.
Read More