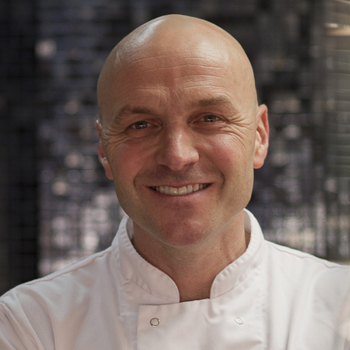 Resident chef on Channel 4's 'Sunday Brunch' which followed his previous show 'Something for the Weekend',  Simon Rimmer began his television career on Granada's lifestyle channel Breeze. He has  hosted shows including Livetime and Battle of the Chefs and has appeared regularly on This Morning, Granada Tonight, A Taste for Travel, Lunchtime Live and The Afternoon Show, Gloria's Open House Channel 5 and Xchange for CBBC.
Although not a vegetarian himself, Simon became known for the innovative vegetarian food he created for his Manchester restaurant 'Greens' opened in 1990. Greens has been recognised as one of the best and most exciting vegetarian restaurants in the UK and awarded North West Restaurant of the Year.
Following the success of 'Greens' Simon went on to open 'Earle', a modern brasserie in Hale, Cheshire, in with a menu designed to appeal to meateaters.
With his fresh, funky and fun approach to food, Simon believes that cooking is about exciting people.
Simon's first book 'The Accidental Vegetarian' was published in 2004 to great acclaim.  His second book 'The Rebel Cook' followed in 2006, and in 2008 he co-wrote 'Lazy Brunch' with Tim Lovejoy. 'The Seasoned Vegetarian' went on sale in 2009.
Simon is also a freelance textile designer and ceramic decorator after having achieved a degree in Fashion & Textile Design.
"Simon was really engaged in the whole evening and seemed to get on ever so well with the guests on my table ...Basically a top bloke , that I wouldn't hesitate to book again."  Quality Food Awards - November 2
Read More