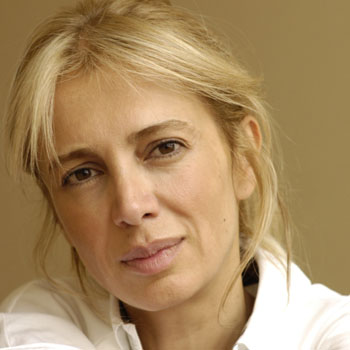 Sahar Hashemi OBE is one of UK's most inspirational female entrepreneurs and a powerful speaker on innovation and entrepreneurial mindset sharing with the audience her captivating personal stories of building two famous brands; Coffee Republic, UK's first coffee bar chain, which she and her brother grew to 110 stores and £30m turnover and exited in 2001, and Skinny Candy, the guilt free confectionery brand which she sold in 2007.
She is a bestselling author.  Her book 'Anyone Can Do It - Building Coffee Republic from our Kitchen Table' has been translated into six languages.
'Switched On' is about developing the entrepreneurial mindset in large corporations.
Formerly a lawyer, Sahar has been recognised for her achievements as an entrepreneur by Her Majesty the Queen and named as a 'Pioneer to the life of the nation'.  She was named Young Global Leader by the World Economic Forum in Davos.  She was also named one of 100 most influential women in Britain by Daily Mail and 35 top women in British business by Management Today.
In 2011 Sahar was listed in The Director's Top 10 list of Original Thinkers, all connected by a single ambition: to redesign an established concept so that it fits the demands of the future, whether for the good of business, or society.
Sahar featured in the 2016 Maserati 100  - a definitive list of Britain‘s most successful philanthropists, investors, mentors and advisors, and ascending entrepreneurs, who are supporting the next generation of up and coming business talent.
Her latest projects include being Co-Chair of the Government's Scale-Up Taskforce which brings together entrepreneurs, investors and local bodies. She is also heavily involved with CHANGE PLEASE COFFEE, a coffee brand that recruits staff from local homeless shelters, and trains and hires them as baristas to run their coffee carts around London. The aim is to compete with well known high street coffee brands by offering customers something none of them can - a chance to change someone’s life.

In a Shell Livewire survey of role models Sahar was among the top five along with James Dyson and Dame Anita Roddick.  She has been on the cover of Director Magazine, Management Today, Observer Magazine, New Business Magazine, Business 550 and Voyager.

An internationally recognised speaker, Sahar's captivating and uplifting speeches are unique as she converges her own enthralling 'story' with key themes of change management and employee engagement.  By telling her very personal journey, she connects with the audience on an emotional level and brings to life the passion, determination and open mindedness needed to succeed.  She makes a strong impact, igniting the audience with a 'can do' spirit and the tools and habits to 'make it happen'.
Sahar's speaking topics include:
The Switched On Mindset- Igniting creativity and innovation
8 Habits for a Switched On Mindset
Anyone Can Do it - Awakening the entrepreneur within
Life outside the comfort zone-An entrepreneur's journey
Entrepreneurial Leadership
Standing in the Customer's Shoes
Anyone Can Do it - The journey of turning an idea into a business
"Ms Hashemi delivered a tub-thumping address at the national finals of the Forward Ladies Women in Business Awards, which celebrated female entrepreneurs who are creating jobs and bringing investment to the UK."  Yorkshire Evening Post - November 2015
"Thank you for speaking at our event yesterday. Your talk was very inspiring and hit the spot perfectly. It was a great launch to our event and people left the room energised and motivated.
The feedback I have had from the team has been overwhelmingly positive and the other speakers were able to reflect back on your key messages throughout the day."  Sahar gave the keynote speech and participated in a Q&A session at the Centrica Energy Information Services Personal Development Day - June 2013
“Everyone in the room understood and took away the message that we are all responsible for the success of our business and that applying a more entrepreneurial approach will pay dividends not only in terms of revenue and profit but also the enjoyment that individuals gain from their work.
Melissa Thomas, Managing Director Nycomed
“Judging by the feedback that we have received, it seems as though the 'Switched On' presentation was very well received - certainly hit the spot in terms of how people in Group xxxx would like to work smarter. If you get the chance to send us a one pager on the "habits", then that would be great - we could all do with a reminder from time-to-time.  MD Barclays
'Sahar's passion for innovation energises the room.  The equivalent of a double espresso¦.' London Innovation Forum
"your energising talk on the necessity of passion to drive business growth was inspiring for everyone"   Infosys
"I just wanted to drop you a quick line to thank you for the fantastic job you did last Thursday evening at the RecruitRank awards. "We have had some tremendous feedback - both on the night and in follow up thank you notes. You hit exactly the right note and inspired a lot of the audience."   Sahar hosted the RecruitRank awards in November 2007
Read More