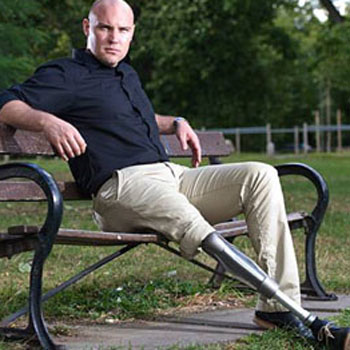 Rory Mackenzie, a South African serving in the British Army as a Combat Medical Technician, was on a tour of duty in Iraq.
Deployed to Basra, Iraq, his role was to help the wounded but three months into a six month tour, on a routine early morning patrol a roadside bomb detonated. It penetrated the vehicle Rory was in. He realised he had lost his leg while he was being handed over to the Immediate Reaction Team on the Chinook helicopter. He was in a very serious life-threatening condition and required a sixteen hour operation to stabilise his wounds.
The next day he was flown to Selly Oak Hospital in Birmingham and had seven further operations. His condition was further compounded when he contracted MRSA, and grew weaker day by day.  But with the help of a fantastic diet provided by his mother (and a horrible broccoli drink made by his brother) he started to show signs of recovery.
After a further seven months at Headley Court and many, many hours in the prosthetics department, Rory had made a complete physical recovery. He  was walking again; not gracefully but walking nevertheless. But his personality had changed. He had become aggressive, angry and upset - his sporting lifestyle was ruined and all he could think about were the things he would never be able to do again.
When Help for Heroes invited him to try adaptive skiing in Germany, through a programme called Battle Back, he jumped at the opportunity. As a South African  skiing had never been at the top of his 'to do' list but he was intrigued at the initial briefing.  Kitted out with the correct length of ski he was onto the slopes and took to the sport with ease. It gave him freedom that he thought he would never feel again and the speed, thrill and excitement of the sport literally healed his unhappy frame of mind.  The freedom and exhilaration of skiing allowed him to forget his disability, and gave him the confidence to approach life with a genuinely positive outlook.
In 2012 Rory was part of a six-man team who successfully rowed the Atlantic with the goal of raising £1m for wounded soldiers as part of the Row2Recovery campaign.
He took part in the closing ceremony of the London 2012 Paralympics, carrying the flag for Help for Heroes - a truly inspirational character with a wicked sense of humour!
"Just a note to say how utterly wonderful Rory was... He was an incredibly easy person to work with, and so very friendly – it was a pleasure to have him there. He even got a standing ovation at the end. The guests absolutely loved him, and wanted to talk to him loads after the event! I would happily and highly recommended Rory as a speaker/host."  Event Manager, Informa  -  November 2017
"Thank you for your wonderful session yesterday. Our client was delighted with how your session went and what positive feedback they have had about you.   The delegates really enjoyed talking to you and finding out more about your life and the amazing challenges you have faced throughout. I will certainly be recommending you to other clients and I very much look forward to working with you again."  Quantum Communications Ltd - April 2014


"He was an excellent choice.  Thank you for the recommendation. Rory presents an inspiring story of ultimate teamwork in the face of adversity which had the entire audience in a sustained standing ovation. Rory is very likeable and entertaining, which makes his story even more compelling. The presentation translates well for businesses with a refreshing new message of strength through camaraderie."  Ignite Annual Sales Kick Off for Concur Technologies - October 2012
"Rory is a truly inspirational speaker. His humility combined with passion and easy humour makes a huge impact. He has spoken to the Diageo Board and at various international events and wherever he speaks he makes a huge impact. I strongly recommend Rory."  Group Director, Whiskies, Diageo
"His ability to tell his story in an enthralling and entertaining way is inspirational to all who listen mix in some humour and humility and I can say without question Rory is one of the best speakers I have ever heard."   Technical Director, Europe, Diageo
Read More

Clip for Rory in WMV format