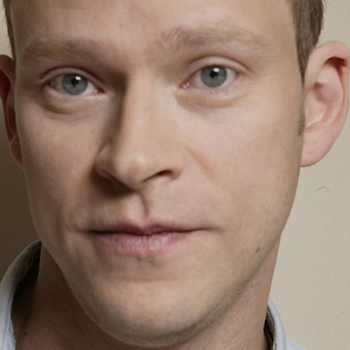 Popular comedian, best known for his work with David Mitchell, contributions to numerous panel shows, and of course "that flashdance" parody on Comedy Relief a couple of years back!

Actor, comedian and writer Robert Webb is best known as one half of comedy partnership, Mitchell and Webb.

He first met David Mitchell at Cambridge when David was president of the Footlights. They encountered each other at an audition for a Footlights production of Cinderella in 1993.

In 1995 the pair put together their first project, a show about the First World War entitled Innocent Millions Dead or Dying: A Wry Look at the Post-Apocalyptic Age (With Songs).

After graduating, they appeared in regular sketch nights on the London circuit, and wrote for a number of shows including Armstrong & Miller and Big Train. They returned to Ediburgh with Shopping and St***-Up (1998), The Mitchell & Webb Story (1999) and The Mitchell & Webb Clones (2001)

Since then they have written and starred in several sketch shows for radio and television; The Mitchell & Webb Situation, That Mitchell & Webb Sound and That Mitchell and Webb Look. Together they are perhaps most famous for the award-winning Channel 4 sitcom, Peep Show, and in 2007 they both appeared in the film Magicians.
As a solo artist Robert Webb has also appeared in two series of the BBC Three sitcom The Smoking Room (2004) and the Radio 4 sketch show Concrete Cow. In 2005 he appeared in the Ben Elton-scripted BBC One sitcom 'Blessed' as Ardal O'Hanlon's 'perfect' counterpart.
In 2008, Robert made his West End stage debut in the UK premiere of Neil LaBute's Fat Pig, co-starring as Tom.  Then in 2009 he won the Let's Dance for Comic Relief competition, parodying the audition sequence from the film Flashdance.
Robert Webb narrated the reality TV series Young, Dumb and Living Off Mum and hosted Channel 4's 2010 series Robert's Web, that looked at the week's online news.

In January 2011, he appeared on a celebrity version of the BBC quiz Mastermind and his specialist subject was the novels of Ian McEwan.  In the same year he played Dan the geology lecturer in the Channel 4 series Fresh Meat.