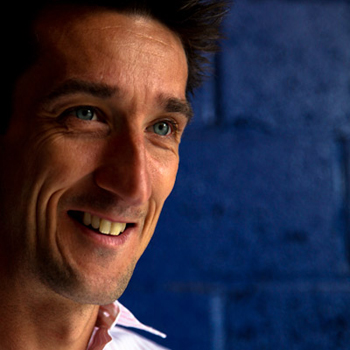 Rob Walker is a Channel 4 and BBC Sport broadcaster with more than 15 years experience in TV. His unparalleled enthusiasm and energy - for life and sport - has taken him around the world to commentate and report on many iconic moments.

On the South China sea in 2008 his live off shore interviews with Britain's Olympic gold medal winning sailors provided the BBC with some of their most memorable Beijing footage. Four years later in London 2012, Rob's Paralympic athletics commentary on David Weir was watched by more than 6 million people and formed one of the highlights of Channel 4's Bafta award winning coverage of the games.

Rob is also regarded as the most influential Master of Ceremonies in the 40 year history of BBC Sport's Snooker coverage, as comfortable in front of an audience as he is in a commentary box.

Rob has a passion for Africa and is a believer in opportunity for all. Since 2005 he has combined the two, running a ground breaking project by selecting, and then personally leading, a group of British teenagers on a fully funded 2 week tour of Kenya and Uganda. So far more than 40 young people have changed perceptions of both themselves and their potential.

In 2016 Rob finally fulfilled his lifelong dream, commentating on the Athletics at the Olympics and then became one of the youngest British broadcasters ever to lead Opening and Closing ceremony commentary of an Olympic or Paralympic Games, overseeing Channel 4's coverage in Rio with warmth and authority.

Rob's determined, humorous and upbeat journey through life and the world of TV sport has brought him into contact with some truly fascinating and inspirational people. His unique style and first hand version of so many memorable events always captivate an audience.

Rob's passion for sport has been both noticed and appreciated overseas. In 2015 Rob traveled to Addis Ababa to receive a special award for a decade of service to Ethiopian distance running from 6 times World and Olympic 10,000m champion Haile Gebrselassie.

Becoming a broadcaster and commentator was Rob's childhood dream and in his motivational speeches, Rob underlines his strong belief that anyone can force open the door to their desired career with a thick skin, enough determination and a touch of humour.

With self deprecating and thought-provoking examples of his own journey through the unpredictable world of broadcasting, Rob's warmth, honesty and ability to tell a story appeals to a wide cross section of people - not just sports fans. He always leaves audiences feeling positive and motivated about their own journeys, ideas and potential.

"Rob has been the presenter at Welcome to Yorkshire’s Y Conferences for the last 6 years and has always been the model professional, doing a stellar job on every occasion. Charismatic and skilled, Rob makes this event a unique experience for the 1000-strong audience, and I look forward to working with him again in the future."  Chief Executive,  Welcome to Yorkshire.