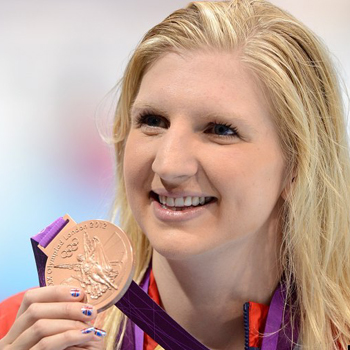 Rebecca Adlington became a household name after winning double gold at the Beijing Olympics in 2008.
The Nottinghamshire-born swimmer made her senior British debut at the 2006 European Championships in Hungary, winning 800m freestyle silver.
The golden girl of British swimming, with a passion for shoes, received pair of Christian Louboutin shoes from her mother after her Olympic success in China, and was famously presented with a pair of gold Jimmy Choo designer heels by the mayor of her home town of Mansfield.
Rebecca's victories in the 400m and 800m freestyle events at the 2008 Beijing Olympics gave her the accolade of being Britain's first female Olympic swimming champion in 48 years.  She also won bronze medals in the women's 400m and 800m freestyle events at London 2012 Olympics.
Following her achievements in Beijing, Rebecca was awarded an OBE by Her Majesty the Queen in the New Years Honours of 2009.  She also came 3rd in the Sports Personality of the Year 2008 and was awarded the Laureus World Sports Awards 'Breakthrough of the Year Award' in 2009.
Rebecca is an ambassador for the Encephalitis Society.
The two-time Olympic gold medallist announced her retirement from competitive swimming in February 2013, at the age of 23, to head up the "Rebecca Adlington Swim Stars" programme to encourage youngsters to take up swimming.
Read More