Rainer Hersch And The Orkestra 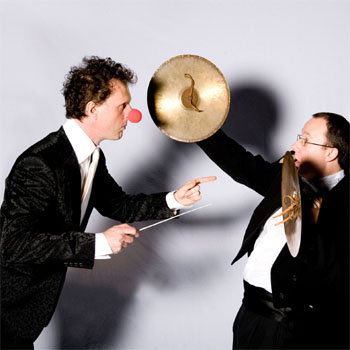 Rainer Hersch is a British conductor and comedian known for his comical take on classical music.

He has toured in over 30 Countries and has broadcasted extensively ,principally on the BBC.

Rainer is unique –as a comedian he has appeared in clubs and festivals across the globe, from the London’s Comedy Storeto Caroline’sin New York, including thirteen appearances at The Edinburgh Festival.

As a classically trained musician, he has conducted some of the world’s most famous symphonies including the City of Birmingham Symphony Orchestra, BBC Concert Orchestra, the Johann Strauss Orchestraand the St Petersburg Philharmonic

Rainer also appears with his own 9-piece ensemble, the Rainer Hersch Orkestra, to engage and delight your audience.  The fun can focus on feither classical music or pop and is completely international.  He is also a fluent German speaker and has presented in Spanish and French.

"Bloody brilliant! The standard of the party entertainment matched that of the whole event and was pitched perfectly for our¨audience of mixed roles and responsibilities and we all stood at the end begging for more! Real professional talent but in a totally fun and unpretentious format it lifted all our spirits and made us laugh together. Pure genius."
Managing Director, Frontier Agriculture
The mix of comedy and classical music was hugely entertaining and the auditorium was filled with laughter from start to finish. Our delegates not only had a brilliant time but they also left with fascinating insights on what conductors do as well as key takeaways on leadership and motivational techniques for teams.¨
Head of Marketing and Communications, Essensys
Read More