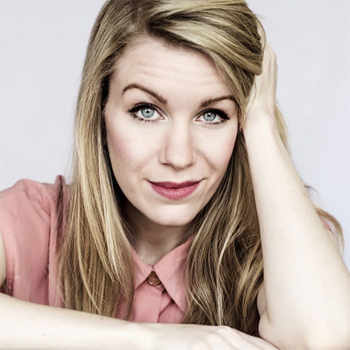 Rachel Parris is an award-winning musical comedian, actor and improviser. She is a regular on BBC 2's The Mash Report, and has also appeared on Live at the Apollo, QI, Would I Lie to You and Mock the Week among others.

She is also an experienced improviser, and is a founding member of the award-winning improv comedy smash hit Austentatious, as well as Harold group The Bishop and all-star long form group The Beau Zeaux.
She has made several appearances on BBC Radio 4 and BBC 6 Music, and on TV, she appeared in the highly anticipated IT Crowd Special on Channel 4, which was nominated in the Bafta Awards. Rachel presented the Game of Thrones fanshow, Thronecast, on Sky Atlantic and she has appeared in BBC3's Murder In Successville.
Other actor credits include There She Goes (BBC4), Plebs (ITV2) and Russell Howard's Good News (ITV3). On stage she has appeared in Death Ship 666 at the Jermyn Street Theatre.
Rachel is married to funnyman Marcus Brigstocke.

Rachel and Marcus host the Speaker Drinks in Lock Down