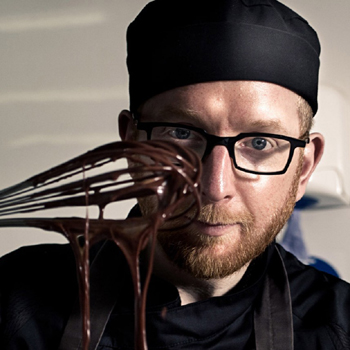 Founder of Paul A Young Fine Chocolates and famed for his exquisite and ingenious flavour combinations, Paul is a ground-breaking and inspirational chocolatier who is at the forefront of the British chocolate scene. His passion for his craft and his cutting edge creativity have won him numerous awards including 'Outstanding British chocolatier' awarded by the International Chocolate Awards.
Paul studied hotel catering and management working his way up through the ranks as a pastry chef eventually becoming head chef for Marco Pierre White at Quo Vadis and Criterion. With an extensive list of experience and before opening his first of 4 unique artesian chocolateries, Paul had worked as product developer for two major retailers, acted as product consultant and taught in numerous cookery schools.
Paul's extensive knowledge has made him the go to chocolatier whose opinions are sought after on a regular basis His first book 'Adventures with Chocolate' won the World's Best Chocolate Book at the Gourmand Cookbook Awards in Paris, was shortlisted for the Andre Simon Award and included in the Independent's Top 50 cookbooks.
Paul is a regular on our television screens in the UK, with appearances including This Morning, Saturday Kitchen, Sunday Brunch, The Apprentice, Junior Masterchef and Paul Hollywood's Pies and Puds and in the US he has appeared on The Nate Berkus Show and The Today Show. Paul has formed several commercial partnerships and developed products with many companies.
A charismatic and entertaining speaker who draws on his experience about the sacrifices he made to set up his business, his dedication to his craft and what inspires him.
Read More