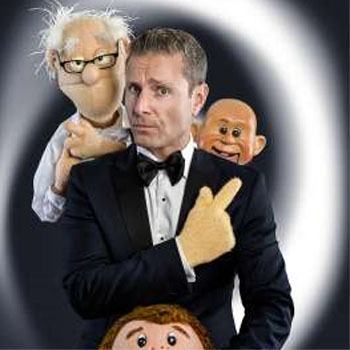 Paul Zerdin is without doubt one of the country's top ventriloquists, appearing with his 'co-stars' Baby, Albert and Sam.  In September 2015 his amazing talent hit the heights when he won America's Got Talent.

Paul began his career as a magician at the age of 15 and, after ruining his GCSE's, decided that the only thing he could do was to go into showbusiness. For the next five years he appeared up and down the country on the club and holiday camp circuit honing his magic while slowly introducing his stand-up comedy and ventriloquism. At the age of 20 he landed his first proper TV job as presenter on GMTV's children's programme 'Rise and Shine'.

Some years later Paul won ITV's nationwide 'The Big Big Talent Show' hosted by Jonathan Ross. Since then he has appeared regularly on the Royal Variety Show and on ITV's Tonight at the London Palladium with Bruce Forsyth. Among many other TV shows, Paul has appeared in Shirley Bassey's 60th Birthday Special for LWT (during which his puppet, Sam, had the nerve to sing one of Shirley's own songs to her), BBC1's Generation Game, 'Late Night With Jerry Springer', Open House with Gloria Hunniford, Today with Des and Mel and, for Sky TV, 'Undercover Magic'. He's starred in TV commercials, too, for Kelloggs, Persil and Honda, and has entertained British forces in Iraq and Afghanistan.

Stage shows include 'The Paul Zerdin Show' to sell-out summer audiences in Blackpool, and 'Paul Zerdin - No Kids' at The Edinburgh Comedy Festival.

He's been a regular in pantomime appearances include starring as 'Buttons' in Cinderella alongside Nigel Havers at the Richmond Theatre, London.  In 2008 Paul starred alongside John Barrowman in the box office smash hit 'Robin Hood' at the Birmingham Hippodrome.

Paul has toured with shows in Las Vegas, Cape Town, Shanghai and Beijing and in the UK with The Joe Pasquale Show, following his own sellout show at the Edinburgh Fringe Festival.

He is a Gold Star member of the Inner Magic Circle.