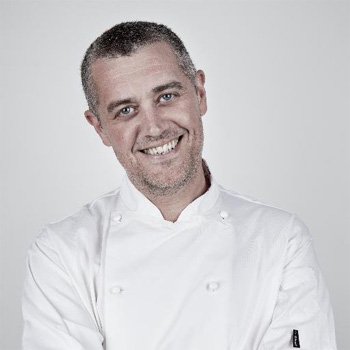 Successful TV chef and author Paul Merrett has an impressive background in the restaurant world, having worked with the capital's top chefs including Peter Kromberg and Gary Rhodes. Over the years he has been involved with numerous television projects including Ever Wondered About Food on BBC1 and The Best on BBC2 in addition to UKTVs Food Uncut and Sunday Feast on ITV.
Paul features regularly on Market Kitchen both as a guest chef and presenter, and his series Economy Gastronomy, co-hosted with Allegra McEvedy is about credit crunch cooking and aired in 2009 on BBC2. A book of the same name which accompanied the series was published by Michael Joseph. He also presented a series with Amanda Lamb, called Family Supercooks on the Good Food channel (formerly UKTV Food) in 2009.
Paul's first book, Using the Plot was published in 2007 and that same year, he returned to the capital's restaurant scene with the purchase, refurbishment and re-launch of The Victoria Public House, Dining Room and Hotel near Richmond Park in West London.
His latest book Spice Odyssey: From asafoetida to wasabi, recipes to really excite and inspire - was published in 2013.
Read More