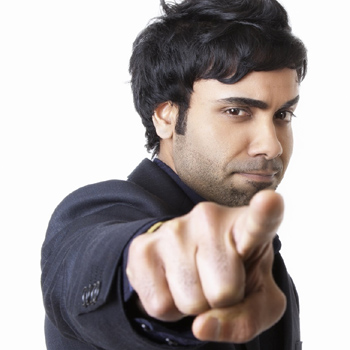 British comedian and actor of Indian descent who began his stand up career in 1998.
Host of the 5th series of Channel 4's comedy series 'Stand Up for the Week', he was a regular for series 3 and 4. He was the first British act to perform at the Caribbean Comedy Festival in Trinidad in 2003, has been a guest panelist on 8 out of 10 Cats and his team was in the final of Channel 4's comedy quiz, Comedy World Cup.
In 2012 he headlined on BBC1's 'Live at the Apollo' and embarked upon his second national UK tour to sell out theatres.
Prior to this, he sold out the Indig02 in 2010 and 2011, unheard of for a non-mainstream TV comedian. This confirmed his position as the UK's No.1 Asian comedian with over 4 million YouTube views.
In 2013, he made a cameo appearance in the hit reality TV show 'Made in Chelsea' and appeared in 'Celebrity Family Fortunes' for the Text Santa charity.
In May 2012, Paul Chowdhry performed at the 02 Arena for CH4 in aid of the Great Ormond Street Hospital Charity, alongside comedy legends including Michael McIntyre, Jonathan Ross and Lee Evans.
Paul was the spotlight guest on BBC Two's 'This Week', presented by Andrew Neil. Alongside a panel including Michael Portillo, he discussed how bad language has become more prevalent on TV.
He has been described by Eastern Eye Newspaper as a “dangerous comic genius and is never far from controversy. He was a topic of discussion in tabloids across the UK and CH5's 'The Wright Stuff' after a racist heckler attacked him.
Read More