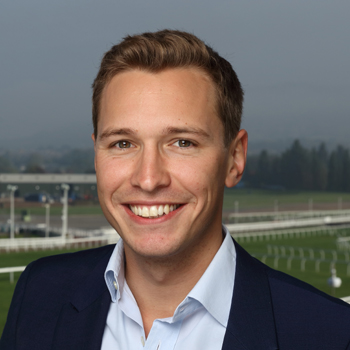 Oli Bell grew up on the outskirts of Glastonbury. He received a drama scholarship to his senior school, and ended up being educated just outside Peterborough. It was here that his interest and passion for broadcasting really began. The school had its own local radio station and, at the age 15, he got the coveted breakfast show slot. Despite not beating Chris Moyles in the ratings war, it was an early education into the broadcasting world.

From here, Oli’s interest in a career in the industry really ramped up, and at 16 he secured his first live role as a radio reporter at the Burghley Horse Trials. This led him to cover some other amazing events such as the Land Rover G4 Challenge and the British Touring Car Championships.

On leaving school at 18, he became an editorial assistant at Racing UK but quickly moved into the role of presenter. Having covered events including Royal Ascot, the Grand National and the Cheltenham festival, Oli was head hunted by Sky in Australia to present their international sport coverage. In 2012, he teamed up again with Racing UK and currently works as horse racing presenter for ITV.

Oli has hosted many corporate events and has spoken at a number of functions. He played on the professional poker circuit for a year and has played both cricket and football to a high standard in South Africa and Australia.