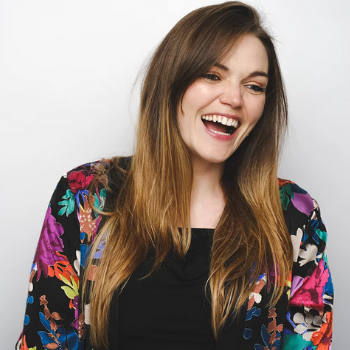 Naomi has performed across the UK and Europe, including the Netherlands, Hungary, Turkey, Austria, Crete, Belgium, Romania, Switzerland and Estonia.

She has supported Jeff Garlin of Curb Your Enthusiasm and The Goldbergs for the duration of his extended sold-out Soho Theatre run in December 2017. She supported Jeff again at the Laugh Factory and the Hollywood Improv in Los Angeles.

In corporate work Naomi has become a favourite for bookers as she is an assured, relaxed and warm host for any event however small or large and she has hosted award in prestigious venues such as The Great Room at The Grosvenor Hotel, London

Naomi is also an accomplished improviser and was the first female finalist of C Venue's Improvaganza at the Edinburgh Festival. She is a founding company member of improv troupe ImproBabble who had a residency with the Leicester Square Theatre.

Naomi trained at Bretton Hall, specialising in classical acting, and graduating with a BA (Hons) in Acting. As an actor she has performed at acclaimed venues such as the Trafalgar Studios, the West Yorkshire Playhouse and the Leicester Square Theatre among others.

“A comedy badass. Naomi is funny. Know that.”