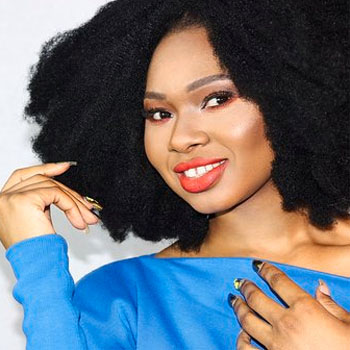 Zimbabwean born Nandi is one of the freshest and most soulful artists to come out of the UK. Inspired by South African musical heroes such as Miriam “Mama Africa” Makeba and Hugh Masekela she began to write her own songs.

Her dynamic and graceful voice is known to silence crowds, whilst gracing the stage of venues such as The Royal Albert Hall, The Roundhouse and The Southbank Centre.

Performances have been acclaimed to be reminiscent of predecessors and her influences such as Jill Scott, Erykah Badu, Chaka Khan and Ella Fitzgerald.

Nandi having worked with artists such as Jack Bruce (CREAM), Emeli Sande, NAO, Maverick Sabre, Orphy Robinson and Cormega has made her a prominent guest artist with emerging production duo 2fox as well as the Royal Scottish National Orchestra.

2018 saw Nandi on ITV’s The Voice, mentored by Will.i.am and Sir Tom Jones.

Following on from her success on the show she has had residencies at The Arts Club Mayfair, White City House and The Ned.

Currently Nandi plans to release solo material and curate bespoke entertainment shows with her wide network of musicians for corporate clients, genres span from Jazz to Disco, Motown to the hits of today.