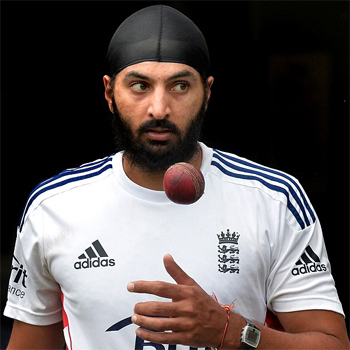 Mudhsuden Singh Panesar, known in the game as Monty, has quickly established himself a national hero following a series-winning display against Pakistan. He has answered every question that has been thrown his way and is quickly making Ashley Giles appear a cricketer of the past.

Panesar made the well-trodden path from Bedfordshire, where he was born, to Northamptonshire, progressing through the youth teams until he was chosen to play for England Under-19s, which he did for two seasons. He then made his first-class debut, marking the game against Leicestershire with a return of eight for 131 in the match and four for 11 in the second innings.

However, first-team opportunities have been limited and after a mere two appearances in 2001 he played only six first-class matches in 2002. Even so, he took 17 wickets at just over 32 each and did enough to earn himself a place in the National Academy squad in Australia during the winter.

A fine season in 2005, where he took 46 Championship wickets at 21.54, was followed by a stint at the Darren Lehmann Academy in Adelaide, and led to calls from his coach at Northamptonshire, Kepler Wessels, for him to be picked for England's tour of India in February. Wessels got his wish and Panesar was handed his debut at Nagpur, picking up Sachin Tendulkar as his first Test wicket, followed by Mohammad Kaif and Rahul Dravid.

That certainly wasn't a bad way to start but his career really took off during his first international home season as he spun England to series success against Pakistan. At Old Trafford he made the most of a helpful surface with eight wickets, then at Headingley he was England's best bowler on a run-filled strip.

His ability to nail the key players moved to new levels with Inzamam-ul-Haq, Mohammad Yousuf and Younis Khan regular victims of England's most exciting spinner for 30 years. His fielding and batting are improving with every game as Monty continues to work tirelessly in all areas.