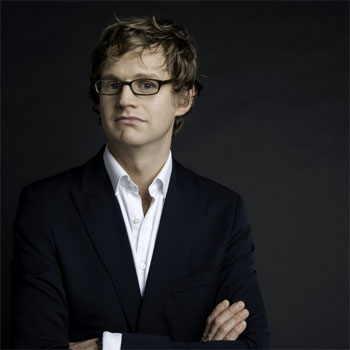 He launched both E4 and More 4, fronting new shows: Show Me The Funny and The Last Word. He became a popular choice after this TV exposure for corporate events.

Mark's career began as a stand-up in 2000, where he reached the final of the competition "So You Think You’re Funny". Since then he has performed stand-up all over the world, delighting audiences with his quirky humour and onstage charm. He has appeared for ten years at the Edinburgh Fringe Festival with many successful solo shows.

Mark can now be regularly heard on Talk Radio and seen on Sky News taking on the paper reviews. He previously presented a daily show on Fubar Radio, Mark Dolan Eats the News, has guest contributed on LBC’s Breakfast Show and co-hosted on The Saturday Show for Channel 5.

Last year he returned to the world of documentaries, recording an exclusive US series for Audible, Mark Dolan’s VIP Lounge. He also competed in Channel 4’s The Jump.

Mark’s is a charming, intelligent and witty host, bringing a wealth of experience and professionalism to any corporate event.

Mark Dolan was a dream to work with, absolutely fantastic from start to finish. From the minute he arrived to the very end Mark fully embraced the event with his charm and professional wisdom. On stage Mark captured the Pimm's theme perfectly with a seamless and effortless comic flow throughout which extended off stage with his constant personal interaction embracing the entire occasion including all the guests, staff and crew.
Pimms My Summer Party campaign winner's event
Mark did a fantastic job - he was a great host and remained in control of the debate throughout, managing each speaker's allotted time and engaging with the audience when the debate was opened to the floor. He had obviously spent time preparing for the debate and this, coupled with his extensive film knowledge, made him the perfect host for this event. The crowd response to him was really great too everyone we spoke to in the audience loved him and found him very funny!
Sky Movies Batman debate
Just wanted to pass on our thanks to Mark for Thursday, he was absolutely brilliant we couldn't have asked for any better, just what we wanted. It was a great evening, big success, so thank you both for helping us bring it together.
Freelancer of the Year Awards
Read More