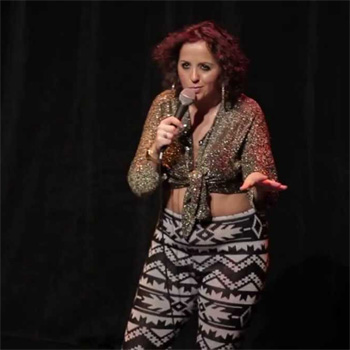 Luisa Omielan is a stand-up comedian, improviser and actress who has been performing on the London circuit since 2008. Luisa was the underground smash hit at The Edinburgh Fringe Festival in 2012 where she performed her critically acclaimed debut solo show What Would Beyonce Do?! strongly agreed to be one of the most successful debut shows to come out of the Fringe.
After a sell-out run at The Comedy Cafe she performed an extended run at the Soho Theatre. Luisa then took her show back to the Edinburgh Festival Fringe in 2013 for a limited run which also got extended for a further 7 shows due to popular demand.
2014 saw Luisa performing What Would Beyonce Do?! in LA and also in New York where she did a 4 night run at Subculture, Bleeker Street. She has had a string of sold out UK dates in 2014 including performances at Latitude Festival, The Royal Albert Hall and the Udderbelly on Southbank, as well as taking the show to Dublin and Singapore comedy festivals.
In 2014 Luisa was invited to perform her solo show for 10 nights with Just For Laughs at the Montreal Comedy Festival she was 1 of only 3 comics invited over from the UK.  Then she took her show Am I Right Ladies?! to the Edinburgh Fringe Festival and it received an overwhelming amount of attention with 4 and 5 star reviews across the board. The show was featured in The Guardian, The British Comedy Guide, The Times, The Metro, The Evening Standard and the Independent.
Luisa has a background in improv. She previously ran comedy improv classes for kids having studied at the infamous US improv schools iO and Second City. She also hosts the hugely popular night in Shoreditch, Musical Bingo.
In 2014 Luisa recorded her first comedy pilot for Radio 2, Luisa Omielan‘s Party and performed a West End run of ˜What Would Beyonce Do?!˜ as well as making several TV appearances.
2015 will include an Australian tour that will take in Perth, Adelaide, Brisbane and Melbourne.
"Luisa transformed the audience at our clients event from FS Corporates to dancing, laughing, crying friends" - Accenture
Read More