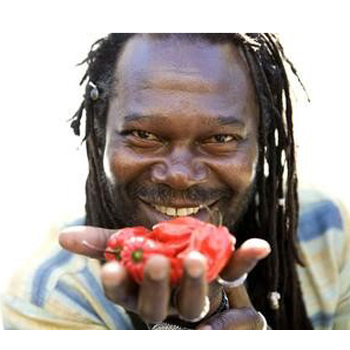 Levi Roots (born Keith Tanyue in Jamaica, 1959) is a reggae musician, chef and entrepreneur currently residing in Brixton, South London. He has performed with James Brown and Maxi Priest and was nominated for a MOBO award in 1998. He was a close friend of Bob Marley when he resided in the UK and performed Happy Birthday Mr. President for Nelson Mandela in 1992 on his trip to Brixton.

Following on from the success of his sauce, Levi released an extended version of his song "Reggae Reggae Sauce". The proceeds from sales went to Children in Need.

Levi Roots' Reggae Reggae Cookbook was published in 2008, with a foreword by Roots' investor, Peter Jones. The book includes chapters about Levi coming to London and an introduction to Caribbean ingredients.

He has appeared on BBC's Ready Steady Cook as a celebrity chef, on Caribbean Food Made Easy (BBC2), on Celebrity Mastermind in 2010, coming second and on Big Brother, where he cooked a Caribbean barbecue for the housemates.