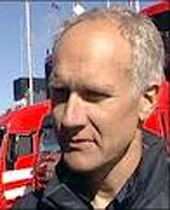 Sports journalist, best known as the lead commentator for the BBC's Formula One TV coverage during 2009 and 2010, Jonathan Legard has also been a football correspondent for the BBC as well as commentating regularly on Formula One races for BBC Radio 5 Live from 1997 to 2004.

After departing from his Formula One television commentator role in 2011 he was appointed sports correspondent for BBC Radio 4's Today programme.  He also features regularly on Sportsweek and these roles allow him to cover all kinds of sports, and work with and interview leading sporting names  and personalities from across the globe.
He joined BBC's Football League Show as a commentator in 2011.
Jonathan Legard has hosted many corporate events as well as sporting occasions and is always able to deliver a professional and interesting performance.
Read More