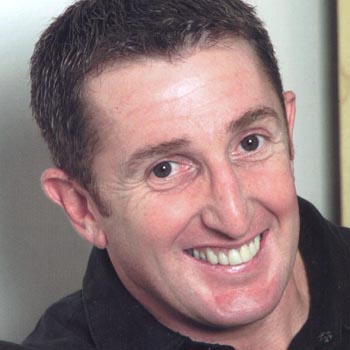 Jonathan Davies's rugby career began in Union, where he excelled as fly-half for Neath and Llanelli. He was later appointed captain of the Wales 15. In 1989, Davies made the leap to League, from the "amateur" to the "professional" game, when he signed for Widnes. His speed, agility and brains soon brought him fame among the burly League players and his transformation from "15" to "13" was so successful that he is now unique in the world, having captained his country in both Union and League rugby.

During his time in rugby league he represented Great Britain 13 times and Wales six times, memorably scoring the lone try in Great Britain's last defeat of the Kangaroos at the old Wembley in 1994. He was named player of the 1993-94 season, winning the RFL's Man of Steel Award and in the 1994-95 season he shone as Warrington's premier player.
Davies' final rugby league match was for Wales against England in the 1995 World Cup semi final, which Wales lost.
He returned to Rugby Union and went back to South Wales, signing to play for Cardiff RFC. He had a lot of trouble readjusting, particularly as he was played out of position: despite the fact that he had played many different positions in league he had only ever played fly-half in union.
On a guest appearance on A Question of Sport in 1995 he was asked what the biggest change was after returning to rugby union. He replied "It's the first time I've been cold for seven years. I was never cold playing rugby league."
In 1996 Jonathan was awarded an MBE and went with his family to Buckingham Palace to collect his award.   Jonathan is now a popular presenter for the BBC .
Read More