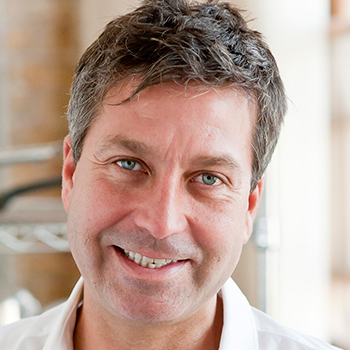 Australian-born but now based in the UK, celebrity chef John Torode is best known as a presenter of the BBC's Masterchef and Celebrity Masterchef, alongside Gregg Wallace.

John began his career in London, where he worked at several restaurants including including Pont de La Tour, Quaglino's, Mezzo, and the Bluebird, eventually becoming a head chef.

As well as making numerous appearances on cookery and travel programmes including Saturday Kitchen, he was the resident chef on ITV's This Morning with Richard and Judy for four years before being chosen to co-present Masterchef.

John has been credited as being one of the main chefs to introduce Australasian food to the UK in the mid-1990s.

He is also dedicated to sourcing high-quality, rare-breed meat, and to supporting organic food and the farming process.  His restaurants in London, including Smiths of Smithfield, are dedicated to serving top-quality meat and poultry; as such, he has built relationships with many small farmers across the UK who supply the very best produce to his restaurants.

John was part of the judging panel for the Glenfiddich Food and Drink awards in 2002, and regularly contributes to Olive magazine. He is also a well-known food writer, cookery author and TV presenter.