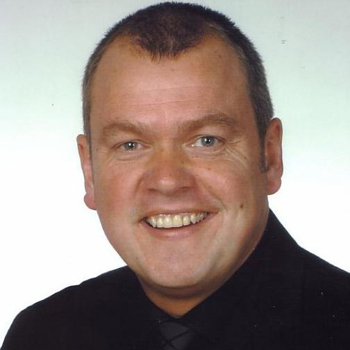 His clever thinking and clean comedy has taken John to a wide spectrum. Entertaining British Forces in Belize, Central America and across Northern Ireland to the worlds finest cruise liners.

He has made himself an automatic choice for P&O Cruises on board each of their top ships. John proved himself to be so popular that he was asked to be the first comedian to appear on board 'Oriano', on her maiden world cruise which enhanced his appeal to an international audience. Several other major cruise lines have been quick to engage his talents for their own ships and John has since made many successful appearances for these companies all giver the world. John is also in great demand by Thompson Holidays for their 5 star Thompson Gold resort hotels throughout Europe.

John's wonderful timing and warm style gained nationwide recognition with his appearances on Granada Television's ''The Comedians'. So successful were his performances that he was an obvious choice to be featured in their video release, 'The Best of the Comedians'. Further television credits include 'The Big Breakfast' for Channel 4 and 'The Jonathon Ross Show'.

John's work at corporate events is unrivalled including shows for BMW, Dundee United Football Club and at The Birmingham International Convention Centre, The Observer News Group.

For the major UK production company Qdos Entertainments, John has appeared to great acclaim in pantomime at many theatres alongside some of the countries top stars including, John Inman and Sue Pollard.

"Very fast, very funny. In fact quite excellent..." The Stage

"John Evans was hilarious from start to finish..."  The Scottish Times

"...a natural performer with a great ability to make you laugh"  Scene Around