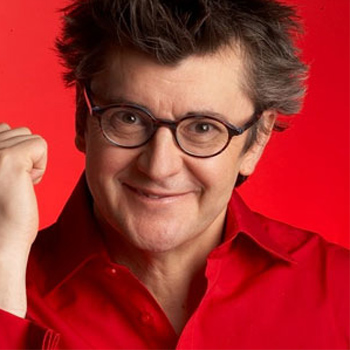 British comedian, of Italian descent, known for his cockney accent and high-pitched voice, Joe Pasquale would eventually go on to win a reality show 'I'm A Celebrity... Get Me Out of Here!' and was crowned King of the Jungle in 2004.  He has starred in a number of stage productions including 'The Nerd' and 'The Producers' and on TV has hosted 'The Price Is Right' and 'BingoLotto'.

Born in Essex in 1961, Pasquale honed his talent for comedy whilst working as an entertainment manager at a holiday camp.

His first big break came in 1987, when he finished as runner-up in the TV talent show 'New Faces'. 1993 saw him return to 'New Faces', which he then won, but the growing popularity of alternative comedy saw Pasquale's career take a bit of a stall.

But during the nineties Pasquale's influence and following grew, and in 1996 he released his first video 'Live and Squeaky'. He would go on to release more videos over the next few years, and by 2005 had played the Royal Variety Performance for the fifth time.

In 1999, Pasquale took on his first acting role in 'The Nerd', which was critically acclaimed.  His next acting appearance was on tour with the show 'The Producers' playing Leo Bloom and he also hosted TV game show 'The Price Is Right'.

In 2006 he toured with his successful solo show 'Return of the Love Monkey' and in 2008 he was back on TV hosting 'BingoLotto'.

He continues to tour and  is also a regular on the pantomime circuit.

His TV guest appearances include  'The Weakest Link', 'The Paul O'Grady Show' and 'Ant and Dec's Saturday Night Takeaway.'