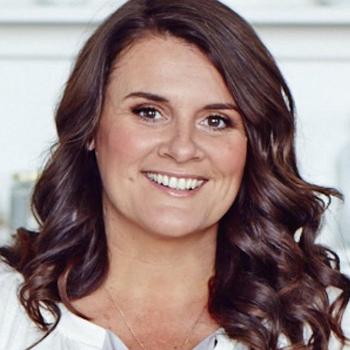 Jo Wheatley has always had a love of baking since a very early age. One of her earliest memories is of making jam tarts with her Nan while standing on an upturned bucket. For the past twenty-five  years Jo has been a wife and a mother and, without realising it,  extending her knowledge and perfecting her skills as a baker, cooking and baking for her three hungry boys.
After watching BBC's Great British Bake Off she decided that she would enter the next competition.  It also made her realise that she would like nothing more than to pursue a career in the thing she loves doing most of all - baking!  Not only did she make it through to The Great British Bake Off but also she went on to win.
Since winning the Great British Bake Off,  Jo has set up a small cookery school from her home in Essex and has written her first book 'A Passion for Baking'..
In 2012 Jo gave food critic Jay Rayner a mini baking lesson on the art of scones for BBC TV's The One Show.
She has an extremely successful blog entitled Jo's Blue AGA, receiving between 1500 up to 30,000 hits day.  Her recipes have been published on the BBC website, in The Great British Bake Off book and in The Daily Mail's Weekend magazine.
Her mantra in life is: if it doesn't work first time, try again until you get it right. She says "I think with baking it's mainly about flavour, if you get that right all the other elements will fall perfectly into place".
Jo currently lives in Lisbon with her two dogs.
Read More