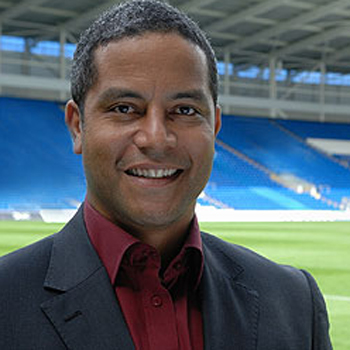 One of the most brilliant talents ever produced in English rugby, Jeremy Guscott was a player of astonishing natural gifts. His career was a succession of triumph - at club level with Bath, with the England team which won three Grand Slams in five years, and with the victorious 1989 British Lions and 1993 Lions Team. He was part of a remarkable boom in the game's popularity.

Jeremy was born on 7th July 1965. He was raised in Bath and educated at Ralph Allen School, where he shone at just about every athletic activity he tried notably football, cricket and Judo. He showed outstanding promise in judo winning a South West title.

His introduction to rugby came when he was seven years old, and joined the ' Bath Rugby Minis'; he played for them regularly until the age of sixteen. He transferred to Walcot Juniors and played for the Bath Youth Team. His first Bath match came in 1985 when he was nineteen and soon he was a regular player, representing Somerset and the South West Region Team. The England 'B' cap was awarded to Jeremy in 1988. Jeremy celebrated his first England cap in 1989 by taking a hat trick of tries against Romania in Bucharest.

England reaching the finals of The World Cup in 1991 and achieved the Grand Slam in the Five Nations' Cup. The 'Grand Slam' success was repeated in 1992 and 1995 making England the most successful of the Five Nations teams ever. In 1992 Jeremy became a member of the World XI Tour to New Zealand to celebrate the centenary year of the All Blacks. Following his selection to play for the British Lions in Australia in 1989 where Jeremy was instrumental in securing an historic victory, Jeremy was honoured to represent them again in 1993 against New Zealand.

The lacklustre performance of the English backs without Jeremy would have ensured his selection of England's tour of South Africa in May 1994 (the first of South Africa for over a decade) but due to an injury that limited his rugby to three matches in the 1993/94 season, Jeremy was unable to join the England team.

October 1994 saw Jeremy on the fitness comeback trail as he had his first games of rugby for over twelve months for his club, Bath. Such were his performances that despite no international experience for 17 months, the England selectors had any hesitation naming him for the international against Romania at Twickenham reuniting his centre partnership with Will Carling in November 1994.

Off the pitch Jeremy was one of the first players to take advantage of the new freedoms in the game as it moves to full professionalism. His transcendence from the game of rugby to television presenting, radio commentating and modelling has made him a household name.

His television credits include presenter of Carlton TV's 'Body Heat' alongside Sally Gunnell and Mike Smith.  He also presented the BBC2 children's series 'Top Score', a child-friendly introduction to opera, which explore the world of opera through the staging of 'La Boheme' at the Royal Opera House.

Articulate and at ease when in the public eye, Jeremy slotted comfortably into the commentary teams at the BBC and ITV, covering the 1994 Five Nations Championships, Pilkington Cup Final and England historic trip to South Africa. His broadcasting career has taken off and Jeremy is now a regular contributor to BBC Radio Sport on Five. He is also the Daily Express newspaper's rugby columnist.

Jeremy's autobiography 'At The Centre' was published in 1995.  He is an excellent and enthusiastic golfer with a handicap of 12. His other leisure interests include tennis, clay pigeon shooting and fly-fishing.