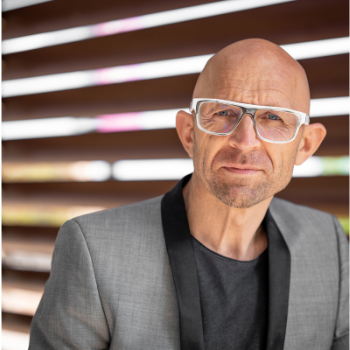 “You’d think the glitz and glamour of two decades in front of TV cameras would hold a pull for me. Honestly, an inspiring one-to-one conversation or meaningful presentation in front of a live audience is where I really come alive.” Jason Bradbury 2022

Jason is perhaps best known as the white bespectacled host of Channel 5’s The Gadget Show, but his infectious passion for technology and science and natural effervescence has seen him front of camera for over twenty years on just about every UK TV channel from Channel 4, to ITV, BBC to Discovery.

Jason has been at the centre of the social media influencer movement since the early days of Twitter and now with Instagram, but his focus in recent years has been his public speaking career. His ‘Thousand Year Decade’ and ‘Lockdown Decade’ speeches, predict the dramatic changes to come over the next ten years in A.I, Blockchain, Energy, Retail, Health and Entertainment(and many other sectors) using exponential growth models.

Jason regularly enthralslarge audiences for major global brands, often entering the auditorium on an exotic electric gadget and using tech props and prototypes to illustrate his inspiring content. Having started his professional life as one half of a comedy double act with David Walliams, it is no surprise that Jason brings as much humour to his talks as he does insight.

During Lockdown, when the events industry was at a standstill, Jason wrote and directed an online video course, Talk for Pleasure & Profit aimed at sharing the public speaking and confidence skills he has acquired over the course of hundreds of speaking engagements. This has now evolved into a series of live events.