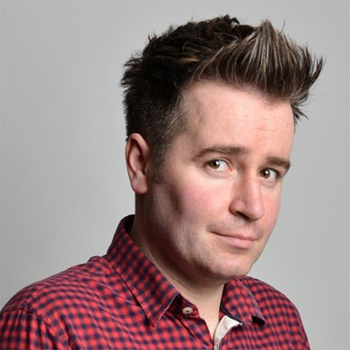 Jarlath Regan is an award winning Irish comedian, writer and broadcaster. He has gained a reputation for his uplifting, inventive and relentlessly funny stand-up. His performances have made him a firm favourite in all the top clubs on the UK comedy circuit and his award winning Irishman Abroad podcast, where he interviews some of Ireland's most famous exports, including Graham Linehan, Dara O'Briain, Chris O'Dowd and musician Lisa Hannigan, has won him universal acclaim.
The 'An Irishman Abroad' was named as the best new audio podcast of the year in the iTunes Best of 2013 list.
Since 2007, Jarlath has taken seven solo shows to the Edinburgh Fringe and has enjoyed sell-outs and rave reviews. He has performed at numerous international comedy festivals.
A finalist in the BBC New Comedy Awards and Channel 4's New Comedy Awards, Jarlath's book 'How To Break Bad News' was an instant best-seller. His second book 'Putting A Ring On It - What Not To Do When Attempting To Get Married', featured more than 200 illustrations and became a cult hit.
Jarlath's other credits include BBC Three's Russell Howard's Good News, Comedy Central's The World Stands Up, NBC's Last Comic Standing, BBC Radio Scotland's Live at The Stand Comedy Club, BBC Radio Ulster's The Blame Game and TV3's The Apprentice - You're Fired.
"Jarlath did not disappoint, his wit and sensibility had the audience in howls of laughter."
"While he's not as well-known as some Irish stand-ups, he's every bit as talented."
Read More