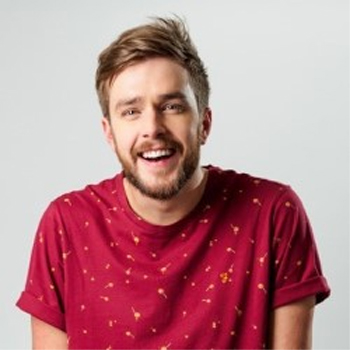 Iain Stirling is a stand-up comedian. He was the face of CBBCand is now the voice of Love Island.
He burst onto the comedy scene, whilst studying for a Law degree at Edinburgh University, and was later placed second in both the Paramount Funniest Student final (2009), and the Chortle Student Comedian of the Year final (2009). Just one week after graduating, Iain found himself on a train down to London to begin presenting on CBBC.

Iain has played at some of the most established gigs in the country, including the Stand (Edinburgh and Glasgow) and the Comedy Store (London and Manchester).

He has supported Rhod Gilbert on tour and was The Scotsman dubbed him one of Scotland's hottest newcomers after his performance at Glasgow Old Fruit Market to over 750 people.

On CBBC Iain presented alongside his trusty canine puppet sidekick, Dodge, doing over two hours of live continuity links every weekday afternoon. He also developed and written for a number of other CBBC projects.

Away from children's programmes and Love Island, Iain has provided the BBC Red Button commentary for the World Cup Final, and continues to report for them on football and Formula 1.