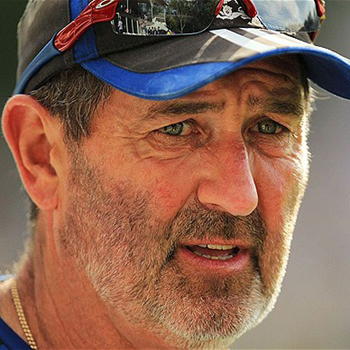 Graham Gooch was brought up in the Ilford area of London. It was here that his potential was developed and he progressed through the Ilford teams as a player who could do a bit of everything. He joined the Essex 2nd XI in 1969 and in 1973 he made his first-class debut. He was soon in the runs, and he made his maiden ton a year later.

1975 was the breakthrough year - he played for the MCC against the Australians, made 75 and was soon the name on everyone's lips. Gooch was picked for the Edgbaston test.

Whether it was too early for him, or the pressure was too much, he was dropped and it was only in 1978 that he made his comeback. A year later Gooch was instrumental in Essex capturing their first trophy in 103 years of the club.

The most controversial aspect of his career came in 1982 when he led the first England rebel tour of South Africa. He was subsequently banned from test cricket for three years.

Gooch went back to county cricket but in 1985 he was recalled to the team.  In 1986 he was appointed captain of Essex and in 1988 he captained his country for the first time against the West Indies. .

A year later Gooch made 154 not out in the second innings against the West Indies at Headingley. It is widely regarded that this was his best innings.
As England captain Gooch led his country to its 3rd World Cup final. The 1992 season was overshadowed by allegations of ball tampering and a decline in fortunes followed but the team's performances continued to be poor, so he resigned the captaincy.
He retired from test cricket in 1995, comitting himself to Essex.  He took part in the over 35's World masters cup where he scored well against India. In 1996 he hit another double-century against Somerset and finished the season top of the batting averages, also topping the Whyte & Mackay ratings.
Graham Gooch holds the records for:
¢    Most test and one-day appearances for England
¢    Most test runs for England
¢    The highest opening and second wicket partnerships for Essex
¢    The most first-class runs in a season for Essex (2559)
¢    The most career runs for Essex
¢    The most career 100's for Essex (94)
¢    The highest NatWest Trophy score for Essex (144)
¢    The highest B&H cup score (198 not out)
¢    The joint best NatWest trophy bowling for Essex
¢    The most runs in the Sunday League
¢    Highest NatWest trophy final first-wicket partnership
¢    Most NatWest trophy and B&H runs
¢    Most NatWest and B&H Match awards
¢    Most B&H cup runs
¢    Highest score at Lord's
¢    Only person to get a triple hundred and a hundred in a match
¢    Ninth highest first-class century maker
¢    Fourth highest ever first-class batting average for a single season
¢    Tenth highest first-class run-scorer