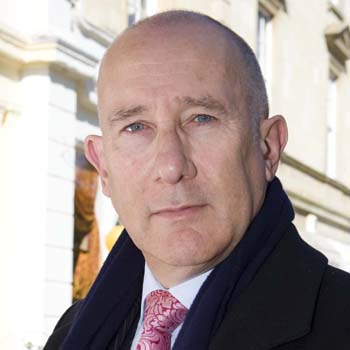 An internationally acknowledged authority on sales and customers, Geoff Burch was voted 'Business Communicator of the Year' by the UK Speechwriters' Guild and is considered to be one of Europe's most exciting and motivational business experts.

He was the presenter of the BBC2's All Over the Shop programme where he helped small businesses up and down the country to survive and thrive and has also contributed to many radio programmes.

He is possibly the most original sales coach in the UK and is an extraordinary speaker with a unique and refreshing outlook on customer care and sales.

The son of a Viennese psychiatrist, Geoff has a wealth of experience illustrating the thinking required to make sales and develop customer loyalty.

By studying the profile of the audience, the market in which they operate, the competition they face and the advantages they have, he combines this information with his approach to make a sales organisation believe in itself and establishes the motivation to succeed.

His slightly unconventional image and extensive use of humour are integral to his powerful messages that can benefit to any client-focused organisation. His credentials are impressive having worked extensively with the likes of BT, Barclays, Lloyds, Gallagher, Prudential, Pearl, Scottish Amicable, Lex, Logica, Tandem and many more companies, presenting, motivating and training at all levels.

Highly experienced and always captivating, Geoff Burch has the unusual habit of arriving at a conference on a motorcycle, normally a Harley Davidson.

He is the author of Resistance is Useless - the Art of Business Persuasion, which was also published in the USA following its outstanding success in the UK.

The Sunday Times referred to him as "The Hell's Angel of Management Consultancy", Later magazine called him 'Britain's Toughest Business Guru', and the Daily Mirror said 'He makes selling a joy'.

"Geoff arrived early and wasn‘t put out that we were running late ... and he gave a hilarious performance which everyone really enjoyed, we‘d recommend him."  The Negotiator Awards for Propertydrum Ltd - November 2015