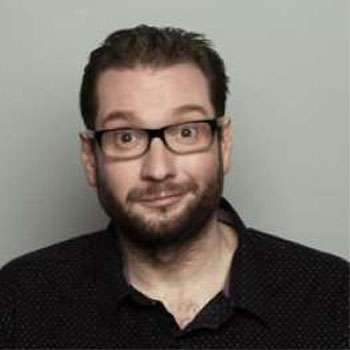 Gary Delaney is a comedy writer and razor sharp one-liner comedian, widely regarded as being one of the most quotable comics on the circuit.  Described on BBC Online as "the man Jimmy Carr tries to be", Gary's high quantity of stand out gags leave the audience in stitches and struggling to remember the one liners as they come thick and fast.
Gary is at home in venues all over the country from arts centres and theatres to rowdy pubs, clubs and corporate gigs. He regularly plays all the big clubs including The Comedy Store, Highlight, Jongleurs, Komedia, Glee, Rawhide, The Frog and Bucket, Hyena, Baby Blue, The Stand, Comedy Café, Lee Hurst's Backyard, Banana Cabaret and headlines at clubs throughout the UK.
From Dave's 'One Night Stand'to Comedy Central's 'Comedy Blue' and on Channel 4's 'Robert's Web' as well as Radio 4's 'Loose Ends' and Radio 2's 'Russell Kane's Whistle-Stop Tour'.
Gary has also written for other stand-up shows and comedians including Ivan Brackenbury's Hospital Radio Roadshow (Perrier Award nominee in 2007), Jason Manford and for Micky Flanagan's appearance on the Royal Variety Performance.
He has written for a host of TV and radio programmes including 8 Out of 10 Cats, Mock The Week, Russell Howard's Good News, Jason Manford's Comedy Rocks, and Radio 4's The News Quiz.
Gary has received two Sony Awards for his work for Birmingham-based FM radio station Kerrang! and his Twitter feed was also nominated for a Chortle Award in 2011.  His debut show 'Purist' was a huge hit at the Edinburgh Festival in 2010, selling out every night and receiving many four and five star reviews.
'Expect a cavalcade of brilliantly inventive puns from this master of the one-liner, a craftsman to be ranked along with likes of Tim Vine and Milton Jones' -  The Guardian
Read More