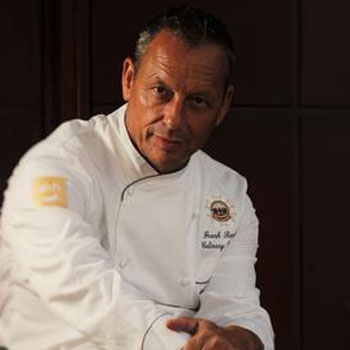 TV Chef, Frank Bordoni inherited his passion for good food from his Italian father as he grew up in the many hotels and restaurants that his father managed up and down the UK. He is food editor of 'Pure Magazine' and one of the UK's leading authorities on cooking with organic food.

At only 19 years of age, Frank was awarded his first AA Rosette, leading him to work with many respected Chefs in well-established restaurants, like 190 Queensgate, Michelin starred Mallory Court and Le Gavroche with the Roux Brothers.

His campaign for more flavoursome and better quality ingredients in Britain have made him a guru for organic food and healthy lifestyles.  He works with various associations like The Soil Association and The Green Guide and is a member of The Cookery and Food Association, The Craft Guild of Chefs and The Guild of Food Writers. Frank is also involved in working with companies and consumers in developing organic produce.

The growing interest in the food that we eat and how it effects us led to Frank becoming OK! Magazine's Resident Chef, writing articles and recipes on healthy eating using organic products and giving lifestyle advice.  As a freelance writer he contributes to many different publications using his extensive knowledge including The Daily Express, Women's Health and Men's Health.

His contemporary style and humorous manner make him an excellent addition to any live event.