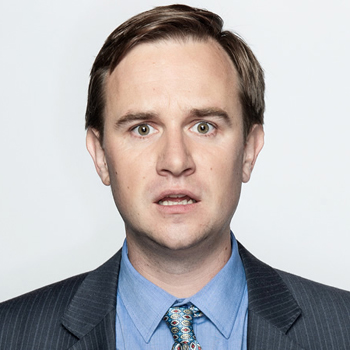 Accomplished actor, writer and comedian with an impressive list of credits to his name, Fergus can be seen playing a wide range of roles in Series 2 and 3 of the BAFTA nominated sketch show Sorry I've Got No Head.

His versatility was also on display in the BAFTA nominated Star Stories with some memorable performances as Nigel Martin Smith, Bob Geldof, Russell Brand and Declan Donnelly. In 2010 Fergus played a lead role as arrogant TV producer Devon Mills in the cult BBC2 sit com Popatron.

Additional TV credits include Extras, The Old Guys, Jonathan Creek, Eastenders, FM, Hey Hey We're The Monks, Harry Hill's TV Burp, Get A Grip, Hotel Trubble, Scoop and After You've Gone. On the radio Fergus is a regular cast member in Radio 4 sitcoms Hut 33 and House On Fire and has appeared in a number of radio plays.

As a writer Fergus has written for Sorry I've Got No Head and co-wrote two episodes of CBBC sit com Hotel Trubble. He is also a regular blogger.

Fergus started performing as a solo stand up comedian in 2008 and was awarded the prestigious Hackney Empire New Act of the Year in 2009. That same year he took his debut solo act Fergus Craig Still Watches Neighbours to Edinburgh and sold out.

Now a regular on the UK comedy circuit Fergus supported Russell Kane on his 2011 national tour.

Before taking the stage as a stand up in his own right, Fergus was a part of the acclaimed double act Colin and Fergus. From 2004 to 2006 they performed in Edinburgh, winning the Writer's Guild Award with their first show. Colin and Fergus had two series of Colin and Fergus's Digi Radio on Radio 7 and were regulars on Out To Lunch (Radio 2) and Comedy Shuffle (BBC3).

Fergus is a skilled voice over artist with a gift for accents and he has provided voices for all three series of Mist: Sheepdog Tales on Channel Five.