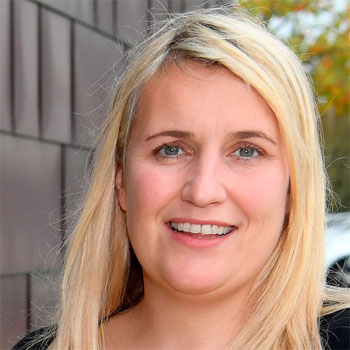 Emma is the first team manager of Chelsea FC Women and is the only female manager to win the Double - the FAWSL title and FA Cup.

She was appointed manager of Chelsea in June 2012 and successfully lead the team to the Women's FA Cup three years later. The team went on to gain the Women's Super League title in 2017 to complete a historic and memorable double. At the time, Emma was the only female manager in the league!

Emma has been in management for over a decade. In 2001, she left London for America. There she joined the W-League side the Long Island Lady Riders for two years, becoming the youngest female head coach in W-League history. She was awarded the National Coach of the Year award in 2002.

When working at Iona College she collected another individual honour in 2004, Metro Atlantic Athletic Conference (MAAC) Coach of the Year, before leading her side to the 2004/05 MAAC Conference Championships.

Emma served as assistant first team coach at Arsenal Ladies from 2006 where they achieved huge success, winning 11 major trophies over three seasons. Emma was also Academy Director, overseeing the development of young players at the club, many of whom currently feature in the WSL.

Emma is also an accomplished public speaker having appeared at many conferences, including the iconic Sports Leaders.

In June 2016, Emma was made an MBE in the Queen's 90th birthday honours list and was presented with it the following December.